Except it isn’t, sometimes.  Sometimes, it’s life long, a constant battle against grayness, against hopelessness, against seeing the world as cliffs surrounding you that you have to climb daily, against feeling as if you live at the bottom of a well and there’s no way out.

Suicide has a checkered history. In some cultures and at some times, it is the honorable way to handle an impossible situation.  In other times, other places, it is the final last gasp of defeat at this sometimes miserable thing called life.  Sometimes it is called, by insensitive people, cowardice, which it almost never is.  Sometimes it is, if something this tragic can be more tragic for some than it is for others, a momentary response of anguish, fury and defiance against a world that just doesn’t understand.

But it is one of those horrible human things that, if successful, is permanent.  No more chances at glory, at happiness, at climbing out of the well, even for a day or an hour.  I once was asked to define death and it was not a “well, duh” moment.  I could only respond that death is the end of choice. But some people feel more and more as if choice has left them while they still exist.

I have only once in my life, a very long time ago, contemplated killing myself. I lived on the sixth floor of my college dorm and I looked out the window for hours one day, not so much imagining myself jumping as fighting the need to jump.  I didn’t think, I didn’t even really feel.  The world was gray.  I had made a huge, horrible mistake and was in more trouble than I had ever been, branded as a  thief.  I saw no way to get back to the other side of the bad thing I had done and be the person I had been.  And I saw no way to become any other kind of person than the bad, no-good person I felt I had become.  Obviously I didn’t jump.  I still don’t quite know why I didn’t. I stared out of that window for hours and then I turned away from the window and made myself a pot of coffee (I could drink coffee then) and I started, step by tiny, backsliding, embarrassing and very hard step, to become another version of me, one that incorporated being a former thief and paying for that and learning new ways to cope with stress and terror and how difficult life could be. And joy and inspiration and zest came back, sometimes intermittently, into my life.

I am in no way comparing myself to Robin Williams or to anyone else who has not found a way to climb out of the well.  As I said, this was for me a one-time, if very long and horrible, moment in my life. For the most part, while I freely admit to being a drama queen, my highs are not manically high, my lows are not suicidal. I have more problems with anxiety than with depression.  But that moment when death did not just seem, but was, preferable to continuing to live happened and it was real.

This is true for a lot of people.  A situation feels hopeless and death seems like the only solution because nothing else is possible.  But the feeling, while real and horrific, passes and the hard climb begins, and life becomes once more possible, hopeful, even good.

But for others, life is a long, hard, and more often than not unremitting battle against depression, against hopelessness.  For the most part, it seems more and more that this “black dog”, as Winston Churchill called it, is a matter of brain chemistry.  And the gray, forever miserable landscape of life felt by a depressed person often does not reflect at all the successful, creative person we on the outside see. Many of our greatest, most admirable people have suffered (and it is suffering, deep suffering) from this debilitating illness of brain chemistry and have created wonders in spite of it. Most of us, ordinary folk that we are, if we have clinical depression, would find our lives more productive, happier, easier, without this scourge of hopelessness.  It is a very hard battle, and as those who have depression would say, it doesn’t lessen with age or wisdom, and the good times get fewer and the lightening of the dark happens less often.

What can be done? There are medications that lift the spirit, but often they flatten the higher end of emotion that is the only candle flame in the darkness of the depressed mind.  There is prayer, there is reaching out to — and by — friends, family, therapy.  There is admitting that the facade of “I’m okay, I’m fine, I’m good” is just that, a facade, and doesn’t match at all the gray landscape within.  We are not talking about sadness here, or grief, or situational depression.  These, while sometimes so bad a person finds it impossible or nearly impossible to live through them, come to us because we have lost something or someone, or have, as in my case, done something we think is horrible and unforgivable.  Sometimes, they come because the road in front of us is just going to get rockier.  I, for one, have no idea how victims of ALS, which is a living death before one inevitably dies, manage to keep going, keep living.  What is life without some kind of hope?

For those who suffer from clinical depression, however, that hopelessness is simply life more days than not. Today I read a story about Robin Williams written by someone who had worked with him. This man saw that Mr. Williams was, when not performing, quiet, sweet, kind, and always somehow sad.  When he was performing, the manic energy poured through him.  I have known artists or of artists, we all have, who seem only to be truly living while they are performing.   It used to be a trope we all believed that artists, by their nature, had to take the bitter — the mental problems, the down times, the depression — with the better — the moments of flow when they felt attached to something wildly creative.  But nobody can work, can flow, can use up all that energy all the time.  The curtain comes down, the applause ends, and you are left with yourself.  And if that self lives at the bottom of a well of hopelessness . . . .

My title for this essay is meant to be unpleasant, even shocking.  Those of us who do not live at the bottom of a well can find it possible to think of suicide that way, that if you, hopeless though you feel, just hang in there, you’ll feel better soon.  As, tragically, the Robin Williams of this world would tell you, were they still here to do so, hanging in there doesn’t much help, because the “feel better soon”  part happens less and less, until all the world is bleak and flat and gray.

Maybe the only possibility is to be kinder, to accept that those around us may be fighting battles we can’t see, can’t know. Sometimes if we listen without judgment, without advice, without telling somebody to pull themselves together, maybe that somebody will be willing to tell us just how gray it is and that might just help a bit. A tiny bit. But maybe not, although that is not a reason to stop trying to help.  We battle many things in our life, valiantly, reluctantly, fearfully, sometimes hopelessly.  And sometimes we lose the battle.  We just do.

I have no solutions to offer, no wise words.  I, after all, am one of the lucky ones whose brain does not routinely bathe itself in the neurotransmitters of hopelessness. But I am sad today because we have lost another creative mind to its own chemical, emotional demons, a life we could not afford to lose, and for such an unhappy reason: Robin Williams could transmit happiness, joy, mirth everlasting to all of us, but could not keep it for himself.

Robin Williams, may your heaven be filled with the joy that so often eluded you in this life. 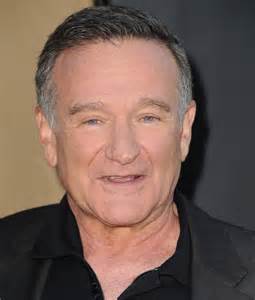