April 30, 2016 By Gail Writing Life in Life Its Own Self, Random Thoughts Tags: Beltane, Holidays, May baskets, May Day, Maypole, Maypole dance, USSR May Day parades Leave a comment

Tomorrow, except across the International Date Line where it’s today, is the First of May. It occurred to me that, rather than do the homework I’m supposed to be doing for the class for Avid instructors I’m taking in mid-May, I’d much rather write a blog post (my first since waaaaay last fall because life happens, I moved to Los Angeles, and I got very busy, which is no excuse) about May Day.

I suppose a lot of us in the US and in Europe connect May Day still with the USSR holiday celebrating the victory of the Bolsheviks over the Russian Empire. I can still visualize the grainy videos of marching troops, miles of huge tanks and “floats” that carried huge menacing weapons passing in review in front of a stand holding the Premier and the highest-ranking members of the Politburo. Amazingly enough, I don’t even have to look up those terms to remember them. Until the collapse of the Soviet Union, such images inhabited a lot of people’s nightmares. 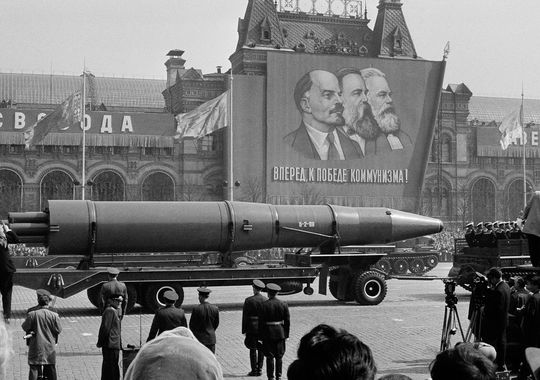 Even those of us too young to really understand this show of power but still old enough to remember living in the days when there were two superpowers in the world staring at each other across a huge wall bristling with weaponry remember the fear this celebration of sheer might engendered. And even then, so long ago it truly seems like another world, I remember resenting the co-opting of one of the happiest holidays – May Day.

May Day originally started as a Celtic holiday, Beltane, welcoming in spring and the renewal of fertility in the earth. The musical “Camelot” celebrated May Day/Beltane with the song “The Lusty Month of May” (here is a link to Julie Andrews singing the song in the original production: https://www.youtube.com/watch?v=pljyjiIMH9o). But the Celts REALLY celebrated May Day. Here is a link to the Wikipedia entry on Beltane (https://en.wikipedia.org/wiki/Beltane). Beltane was celebrated approximately halfway between the spring equinox and the summer solstice (thus, usually on or around May 1) with fires and dances and, admittedly, a good deal of slipping off into the surrounding forest with one’s sweetheart. After all, the whole point was fertility.

Above is a photo of a recent celebration of Beltane held on Calton Hill in Scotland. I’m not entirely sure what fire has to do with fertility, beyond the undoubted fact that burning off a field refertilizes the soil with the carbon residue from the fire, but I would imagine that the Beltane fires were as much a celebration of living through the winter and having fun dancing in the human-created light as anything else. Contained fires, like bonfires and campfires and fireplace fires, are invigorating and calming at the same time.  Fire can be terrifying but a bonfire reminds us (or makes us think) that we humans are in charge of fire. (Mother Nature has her methods of proving us wrong about this as about so many things, which may keep us humble.)  In any event, Beltane was one of the happier holidays celebrated by the Celtic culture throughout Europe even under the rule of Rome and, later, during the advent and spread of Christianity.  (Christian leaders, being canny folk, more or less took over pagan holidays of all sorts, including Yule and Samhain, inserting Christian dogma and saints in the place of the original Druidic lore and Celtic gods and goddesses. This made it possible for the people to transfer over their loyalty to the “new” God, or – and this is probably more likely – continue to worship and celebrate their own culture under the guise of celebrating the Christian God.)

In the process, of course, the holiday became a minor holiday, being so much less important in the calendar than Easter, which is the most important Christian holiday. And while it never completely lost its attributes of fertility, May Day (no longer Beltane) became a rather pretty and, on the surface at least, innocent holiday devoted to flowers and dancing.  In fact, much of the fertility aspect of Beltane got transferred to Easter. Eggs and rabbits are ancient symbols of fertility for entirely obvious reasons. They’re sanitized a bit for the kiddies, but they still mean, like spring itself, the renewal of life. And May Day was left to children and young people entirely, with the symbolism carefully hidden from their innocent minds.

In my childhood, in small town Colorado, May Day primarily became the day on which we took the little baskets we’d made from pieces of construction paper or wallpaper (always in pastel colors), ribbon and sometimes pipe cleaners in pastel colors and filled with candies and flowers to leave on the doorknobs of our friends (or kids that we’d like to be friends with).  The May baskets were projects worked on in grade school classes. Here’s an example: 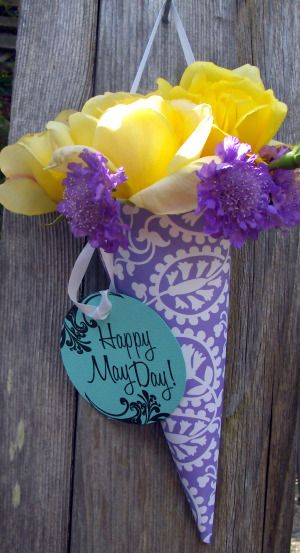 May baskets still hold a place in the world of children and grade schools, but have also become a crafting project. Here’s an article about the history (or part of it anyway) of the May basket: http://www.npr.org/sections/npr-history-dept/2015/04/30/402817821/a-forgotten-tradition-may-basket-day)

Oh, and this is quite important – when you leave a May basket on somebody’s door, it has to be anonymous! Or the point is lost.  This led to the May basket tradition becoming a part of courtship ritual for teenagers. It takes a lot of craft to leave an anonymous basket of flowers and candy at somebody’s door and still let that somebody know who it might be who left it.

Another tradition that leads directly back to Beltane is that of the Maypole.  This traditional dance has almost disappeared. That’s rather sad because it’s beautiful.  In the town square (or perhaps the grade school schoolyard or gymnasium), set up a tall pole, at least 15 feet high, with many colorful ribbons (at least 20 feet long) attached to the top of the pole. Don’t forget the flowers.  Then have the children of your village (or grade school), or girls on the cusp of womanhood, dress up in their new white or pastel spring dresses, put wreaths of flowers on their heads or entwine flowers and ribbons in their hair, give each one a streamer/ribbon and have them dance around the Maypole in such a way that they weave the ribbons in a cross-hatch pattern all the way down the pole.  When the free ends of the ribbons are too short for those holding them to move, the dance is done, everybody cheers, and then there’ll be a party of punch and cake and cookies and candy with a probable finish after dark of a bonfire. 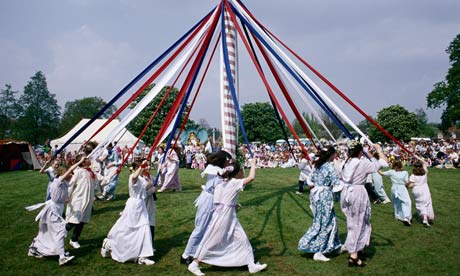 The particular Maypole above uses the red, white and blue of the American flag as a theme and is obviously part of a larger celebration of spring (note the tent in the background), and it looks like a lot of fun.

I remember once in grade school (which was a while ago, but some things do stick in the mind) being part of a Maypole dance. We started very slowly weaving in and out around each other to make the pattern of the streamers and then they added the music and the dance got faster and faster.  Of course, being me and contrary, when the great day came and we started the Maypole dance (parents and friends sitting in the gymnasium bleachers and believe me everybody more than ready for the Kool-Aid punch and cookies to come), I managed to get my directions mixed up in all the excitement and started unraveling my ribbon.  As I recall (and I recall it with the vividness we all reserve for humiliating moments), our teacher had to stop the whole thing, we had to unravel what we’d done, and start all over again.  I also remember my mother almost lavender with embarrassment for her wrong-way daughter and my father laughing his heart out.  (I also remember getting an extra treat of candy from him to make up for my embarrassment, so it worked out pretty good after all.)

We don’t do many of these relatively innocent (at least on the surface, please do remember that Beltane from which this all descended is an overt fertility festival) celebrations any longer. While (WARNING: editorial coming) we continue to commercialize Christmas, Thanksgiving, New Year’s, even Easter, and now Hallowe’en to a point past ridiculous, some holidays like May Day have diminished except in small, usually fairly rural spots.  Kind of a shame.

So, here’s to a resurgence in some holidays, like May Day, and may yours be filled with sunshine and flowers and, maybe, just maybe, a May basket hanging on your door. Hmmnhh, I wonder if I have any pastel construction paper and pipe cleaners in my office supplies . . . .